A reader (windvast) has asked the following question:

I'm quite interested in cross tyre setup used by many drivers in Monte Carlo, e.g., Studs in one diagonal and Super Soft in another. Would you please explain how this works, does this setup highly depends on good diffs and etc? Thank you very much.

It makes more sense to discuss your question in a post. Here is the tyre allocation for Monte 2020, for WRC car drivers check List 2. 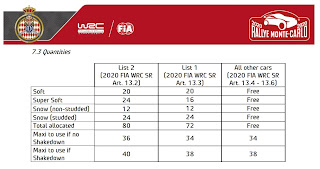 Softs and Super Softs are so called "slicks" for dry or damp/wettish conditions, they have tread patterns that make them look a bit like standard road tyres. 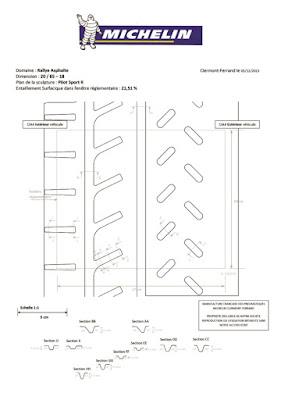 The regulations and the rally formats forced teams to start using this cross system a few years ago. Let's keep in mind that cars can carry 2 spares. Have a look at the SS 3-4-5 loop below as an example. They get to use 6 tyres for that loop. Road conditions will vary a lot. You're talking driving down in the valley, up the mountain and over to the other side. It can rain, be dry, be icy, snowy, etc.

Let's be frank, running a cross tyre setup is a compromise and they're doing it only because they have to. Ideally you want to run 4 of the same tyres on your car to have the same grip level on all 4 wheels.. for stability. You mentioned diffs in your question. The teams will have tested and determined their car setups based on tyres they will run in the rally. So yes, they have optimal diff setups. To my mind there is nothing particular about it, it's just something to be tried and tested.

Here is a hypothetical example where you would see a cross tyre setup:

Stage 3 is 65% dry, 30% damp and 5% patchy ice. The stage is long and twisty so the tire will suffer, especially the front. Stage 4 is mostly dry but there's 30% slush and ice with some patchy ice towards the finish. It's long and very twisty after the mountain pass. Stage 5 is 75% dry and 25% damp, the gravel crew reports patchy ice on 1 km only.

Our driver knows that the fastest option is to drive on "softs" except for stage 4 where he could lose dozens of seconds on the ice and slush. So he needs a compromise setup just for that bit. His decision is to take 4 softs and "2 snow" with studs. He takes the stud option because he feels that will help a bit more in stage 4. But he also knows that after stage 4 his studs will be mostly gone. He plans to run stage 3 and 5 with the 4 softs, using the 2 he kept in the boot for stage 4, on the front wheels in stage 5. In this example our driver will run a cross setup on stage 4. Of course this plan might all go to hell if he punctures in stage 3.

Hopefully this all makes sense.

Email ThisBlogThis!Share to TwitterShare to FacebookShare to Pinterest
Labels: Tires

Help me help you !

You'll probably recognize your pseudonym when you read this, assuming you will come back to the blog one day...
Yes, I have been silent for a while and there's a good reason for this. All my focus has been elsewhere lately, mainly on sports motorcycles and photography. But let's get back to the subject at hand! Around the time I started writing this Bible - sorry - I meant Blog, I also joined this wonderful Motorsport forums http://www.motorsportforums.com on which I have just found a bunch of private messages which I had no idea were there...

So, Mr "Hammer88" if you read this, yes I'd like to help you out with your shock absorber choice for your rally car, but  I'm unable to answer you on the forum, somehow. You can try posting a comment on this blog perhaps?
Posted by Antony at 20:21 6 comments: